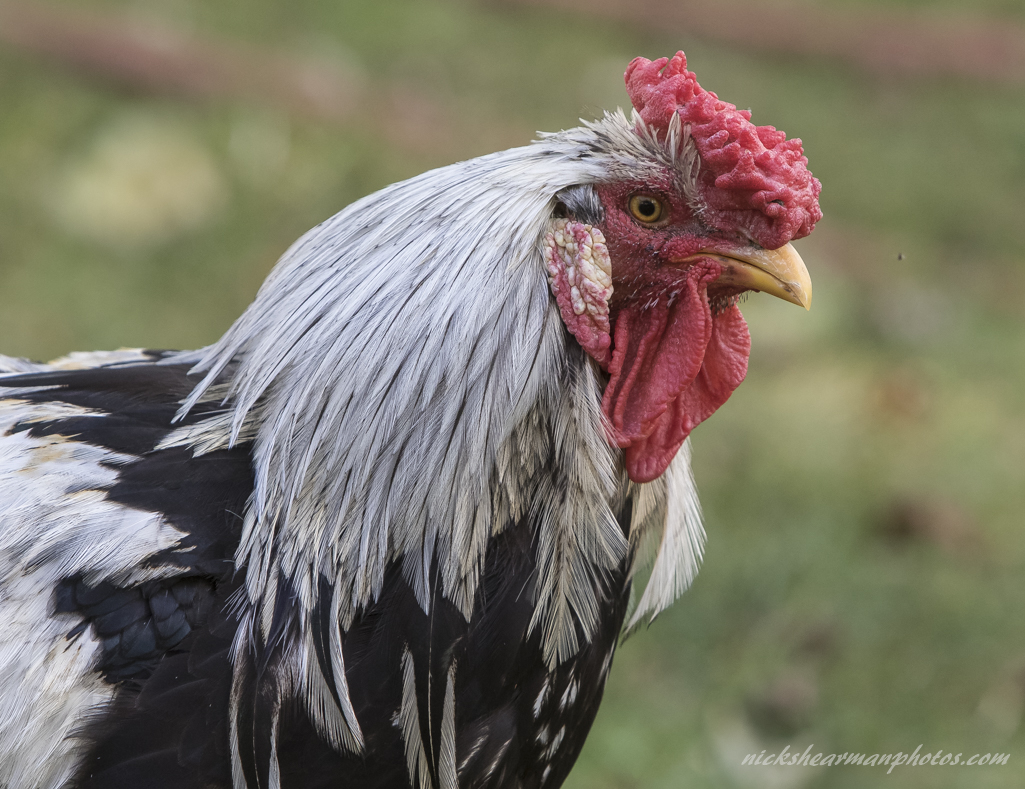 I have been overwhelmed with spring planting and have no time to write a blog, but this weeks series of events prompted me to write.  I have one very handsome and elegant rooster, Gunnar, an Icelandic gentleman. He does an outstanding job of squiring the hens around, finding food for them, protecting them, and he does a courtship ritual before mating (which many roosters don’t bother with!)

One hot day this past week, I rushed home from work so that I could exercise the dogs before a 5 o’clock appointment.  I threw the Frisbee for Pippa countless times, then turned on the rainwater tap that is hooked up to a huge rainwater collection tank.  No water.  I ran around behind the tractor shed to check the pump, and saw that the hose had come off the pump, the pump had run dry and I had lost at least 300 gallons of rainwater.  I may have destroyed the pump as well, but I have yet to check that.  I ran back into the house and filled watering cans to water the outdoor containers.  The dogs were right behind me as I opened the front door , and right in the front doorstep was the little flock of 6 hens and Gunnar. 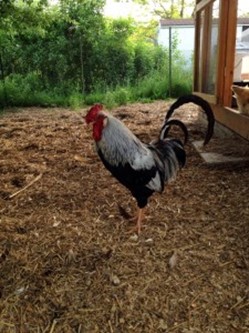 Gunnar after his ordeal.

Frankie, the predator dog, bolted through the door and took off in full hunting mode.  I grabbed a broom and ran outside barefoot and screaming.  The hens were shrieking and he was grabbing at them.  At this point, Gunnar made a run at Frankie , and then drew him off the hens by running down the hill.  I took off down the hill after them, still waving the broom and yelling.

On my way down the hill, I tripped on a roll of rusty wire and cut my foot.  When I reached Frankie, he was on top of Gunnar and Gunnar was on his side, eyes closed and no colour in his comb. There were feathers everywhere.  I tried to pull Frankie off, but his collar was missing and he was not eager to be removed from his kill.  I ran back up the hill, sweating profusely and breathing hard.  I still had the broom.  Obviously a very useful tool.  At the house, I grabbed a leash from the fence and ran back down the hill.  I wound the leash around Frankie’s neck and hind legs and hoisted him off his prey.  At this point, Gunnar got up and started to run as Pippa came racing down the hill to join the fun.  Frankie writhed and almost escaped, but I grabbed the scruff of his neck and dragged him uphill to the backyard.  I went to look for Gunnar but could find nothing but large piles of feathers.

At this point, I though it wise to clean my cut foot and check when I may have last had a tetanus shot.  I went to my appointment convinced that Gunnar had gone off to bleed to death somewhere.  When I came home, I heard his crow and there he was near the coop, waiting for the evening food bowl.  His tail is very threadbare and he is missing a lot of beautiful feathers, but he is alive and well.  I am so impressed with the way he protected the hens, and by the protection provided him by his glorious plumage!    Unfortunately, the cut foot developed a poison ivy blistered rash the next day.  It is not wise to run barefoot waving a broom and screaming.